✔ We tested 7 of the most popular economical fonts. Choosing the right font can save you as much as 77% on your printing costs!

Here at Toner Buzz we decided to put these “eco fonts” to the test.

Determined to find the best fonts for print, we dove deep into which fonts to use.

We took seven of the most popular low-consumption print fonts and ran pages until our ink ran out.

To be sure that our results were objective, we used only black ink and printed just black and white text.

What did we learn from our test fonts?

Surprisingly, several modern, environmental fonts used the most ink, while old classics flexed their storied reputations. Score a win for the senior citizens of the typeface world!

Find out more about our printing fonts test in this video:

How We Chose These Seven Fonts

We scoured the internet, poured through old design magazines, and waded through dusty typeface tomes to narrow down our field of economical fonts to these seven.

Fonts used included traditional printing fonts as well as fonts with holes and other eco-friendly fonts designed to save ink.

Again and again, these seven fonts turned up on lists of low-ink consumers.

Are these the most economical fonts out there?

Well, they’re certainly the ones that get the most press.

But can you believe the hype? Are these fonts truly low ink consumers? Which one is best font for print? Which font uses the least ink and paper?

Check out the results below. 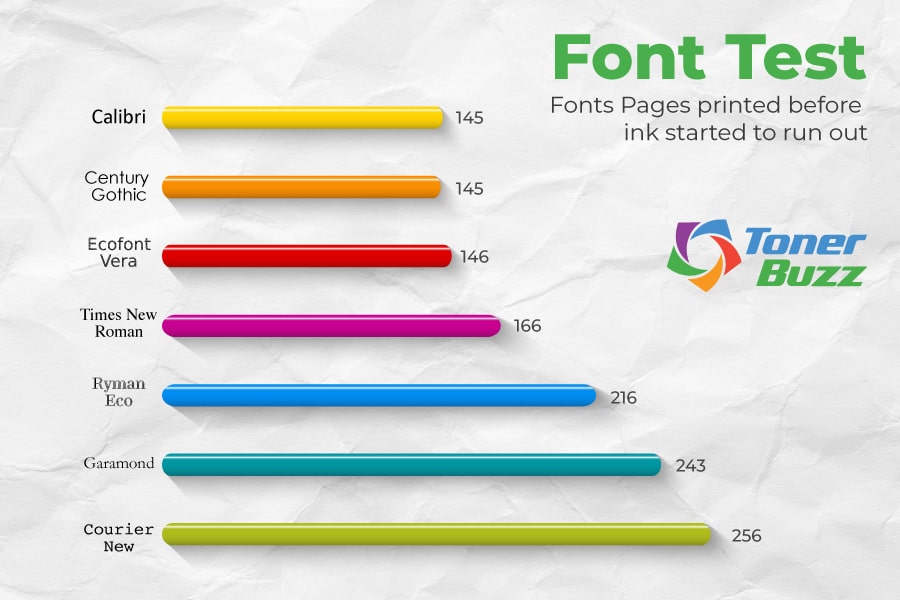 Calibri, what happened to you? You failed! Badly!

Calibri has long been celebrated as a good font when looking to save ink and toner. But our in-house tests showed otherwise.

Calibri debuted with the release of Microsoft Office 2007 and Windows Vista, and it remains a popular, easy-to-read font, especially on screen.

However, if you’re printing out page-after-page, you’ll find Calibri sucks a lot of ink and toner.

Like Calibri, Century Gothic also let us down in our ink consumption tests.

Century Gothic has been around since 1991, and is a clean, sans serif font that makes reading a pleasure. It has also earned a reputation as a low-consumption font.

However, our tests showed that if you print long reports in Century Gothic you’ll waste a lot of ink or toner.

Century Gothic tied with Calibri as the worst performing font in our ink consumption test. Boo!

Shame on you, Ecofont! You call yourself a money-saving font?

You only eeked out one more printed page than those losers, Calibri and Century Gothic! 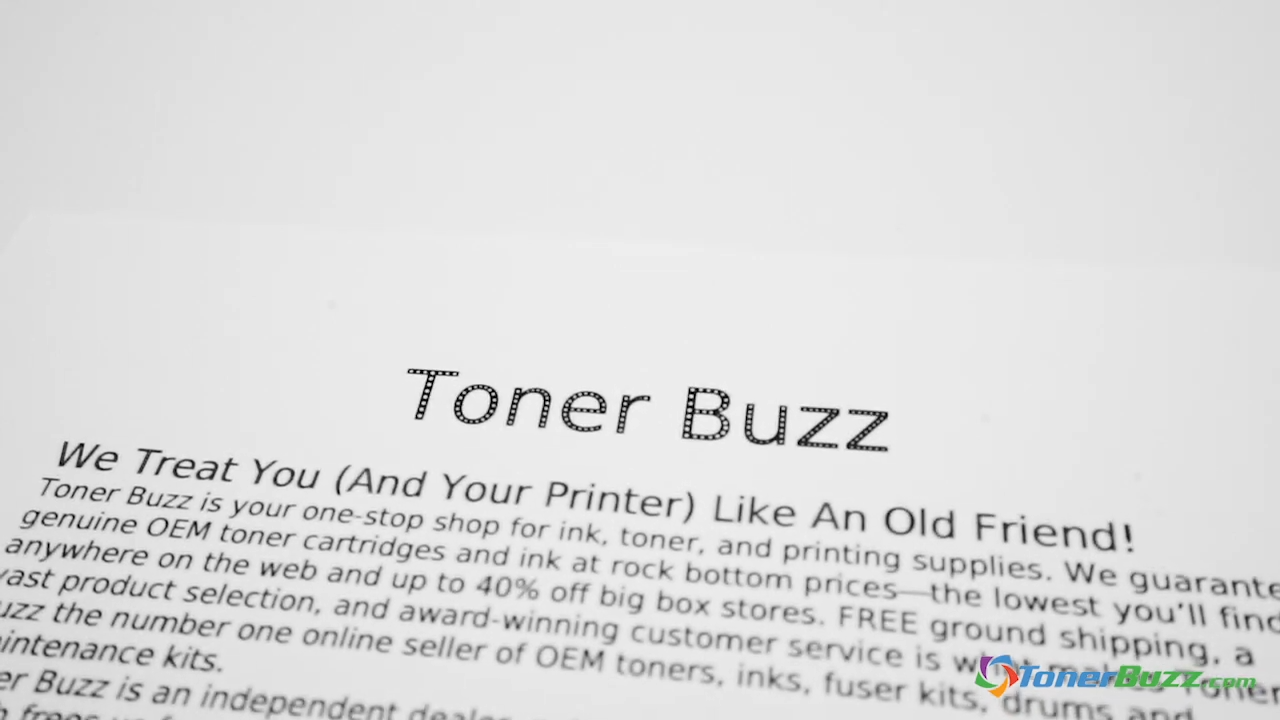 While the idea of poking holes in traditional fonts like Times and Verdana may seem like a logical way to save on ink consumption, our tests with Ecofont San Vera were disappointing.

While Ecofont software claims to reduce ink and toner consumption by as much as 50% we saw no such savings, only a strange font looks blasted with shotgun pellets at larger point sizes.

Sometimes old school is the best school. Times New Roman has been a newsprint staple since 1931.

This elegant, thin-lettered font was designed for economical ink consumption and it performed admirably in our tests, besting more modern, ink-savvy typefaces (we’re looking at you Ecofont Sans Vera!).

An oldie but a goodie, Times New Roman isn’t the most economical font, but it’s far from the worst.

This is the same “hollow letter” concept behind Ecofont, only Ryman Eco seems to actually work.

You don’t notice the hollow letters at smaller point sizes, and even blown up, Ryman Eco remains easy on the eyes.

If you believe its creators, Ryman Eco could save us 490 million ink cartridges and 15 million barrels of oil if used worldwide.

Garamond is an elegant serif typeface developed by French publisher and type designer Claude Garamond in the 16th century, back when fonts were cut into the faces of metal punches and stamped onto parchment, or cut into wood. 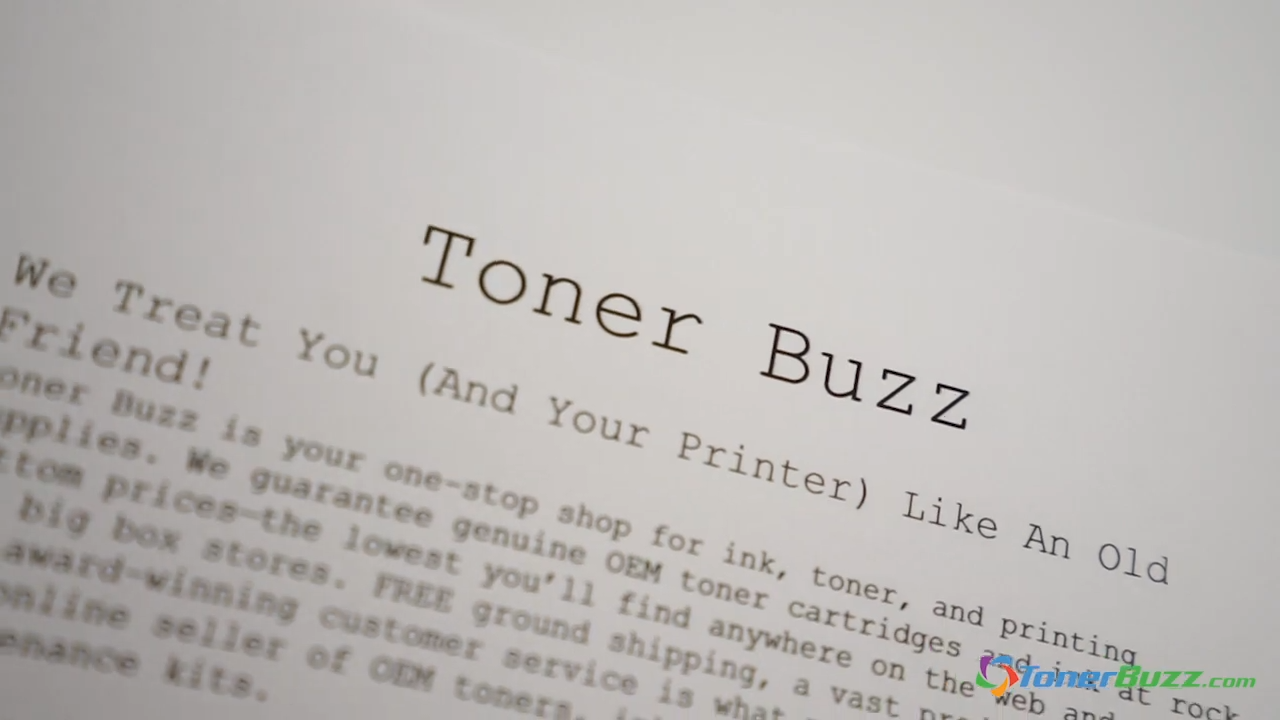 The secret to Garamond’s low ink consumption lies in its small, tight letters. Garamond looks a bit smaller than other fonts of the same size, but its clarity still makes it an easy read.

Garamond is one of the go-to print out fonts if you need a font that uses less ink... and we all want fonts that save ink!

Ah, Courier, the classic “typewriter font,” how we love you!

Your big, round, airy letters may look dated, but they’re easy to read and sips ink like its Dom Perrigon making you one of the best fonts for printing.

In our tests, Courier produced 111 more pages than Calibri and Century Gothic, a massive 77% increase in output!

Economical, easy to read, and retro-cool — what’s not to love about Courier, a fine font that uses less ink?

If you’re into computer coding or screenwriting, the Courier typeface is an old friend. If you need to print a long document, save yourself some ink or toner - use Courier!

The Right Font For You

What font to use?

The goal here is finding the right font for you. You need a font which uses the least ink that strikes a balance between readability and reasonable ink consumption. Finding what font to use may take some trial and error. Demand sustainable fonts, people! Economic fonts!

Which font uses the least amount of ink?

In our tests, Courier was the font that uses the least ink. Your mileage, and page count, may vary when determining which font to use.

Classic fonts to save ink like Times, Courier, and Garamond are good fonts for print. But we also like the direction Ryman Eco is taking modern, ink saving fonts.

In general, a big, bold, flashy font will consume a lot of ink and are not the cheapest font to print. But, surprisingly, even simple fonts, like Arial, are hogs when it comes to ink and toner consumption.

The best printing fonts are ink saving fonts. Stick with the classics and save yourself some money!