Printer toner cartridges and drum units are like cheese and macaroni. Separately they’re okay, but combined together, they’re magical mac ‘n’ cheese! Toner and drum units work together in a similar fashion.Toner is the paint, and the drum is the brush. You need both to do some painting...or printing. But what’s the difference between a toner cartridge and a drum unit?

What’s The Difference Between A Toner Cartridge and a Drum Unit?

The imaging drum and the toner cartridge are arguably the two most important parts of a laser printer. The laser in a laser printer eteches an electrically charged image onto the surface of the drum. Toner particles stick to the printer drum. The printing drum turns and transfers the toner — and image — to the paper.

What Is Printer Toner?

What is toner? What is the purpose of toner? These are deep questions!

Printer toner is the dry powder found inside toner cartridges. The powder — made primarily of ground plastic — holds a negative charge, and the toner particles are drawn to the positively charged image imprinted on the printer drum. 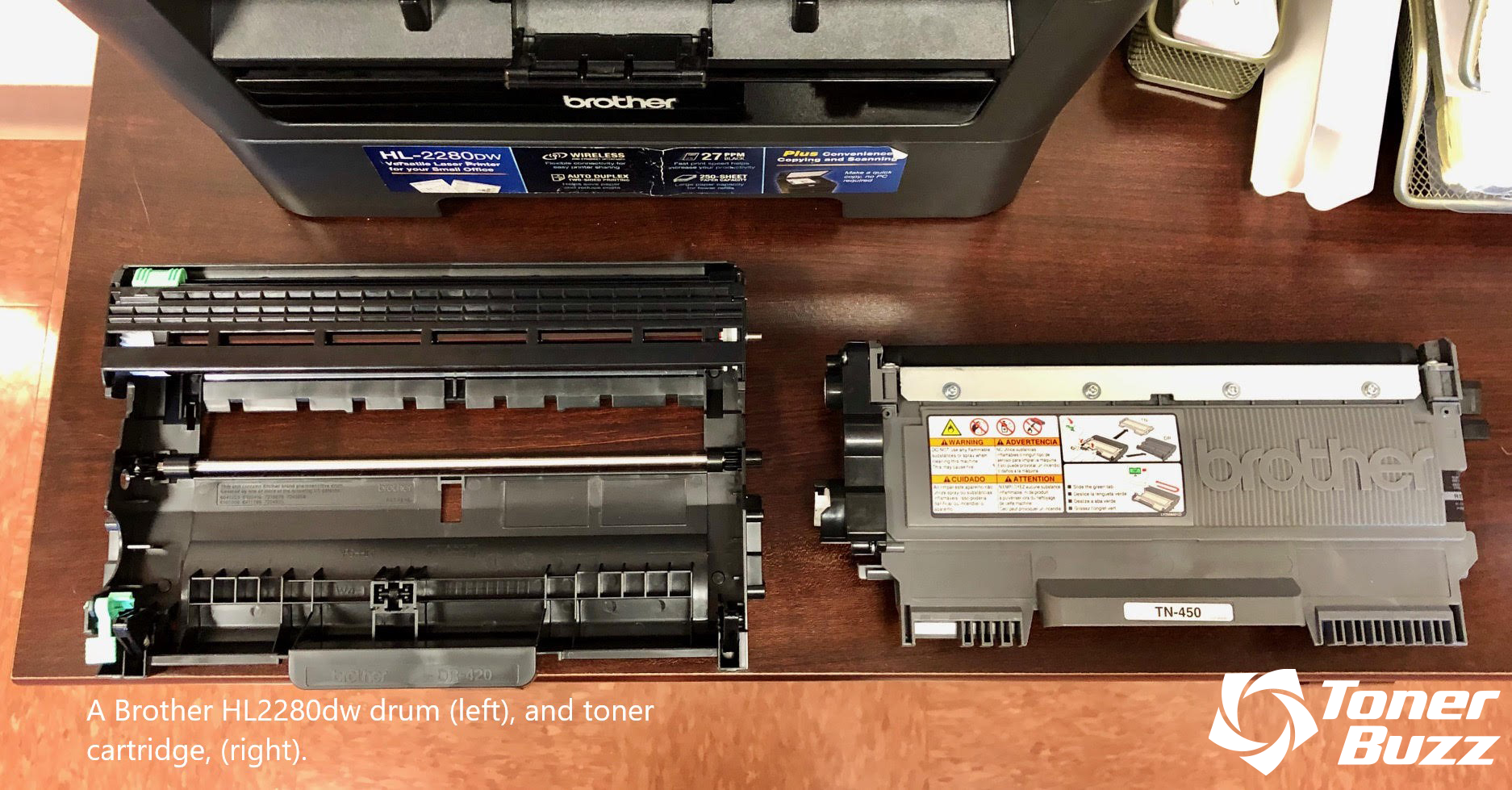 What Is A Printer Drum?

What is a drum, and why does Todd Rundgren want to bang on it all day? What does a printer drum do?

The drum unit on high volume printers looks like a big green cylinder. On other machines the drum is deep maroon in color and about the same size and width as a paper towel roll. Smaller laser printers can have a drum no wider than a pencil.

Regardless of size and color, the primary function of the drum unit is to attract the toner powder particles via electrostatic polarities and transfer the toner to the paper. While the drum receives the electric charge and the image is drawn, the rest of the drum unit stays neutral. A drum uses an electrostatic charge to attract the toner powder particles which are put on a photosensitive roller inside the drum unit. The electrostatic charge is then used to draw the image on the drum that is transferred onto the paper and printed on the page later in the process. This is why drum units are commonly referred to as image drums or imaging units.

Which Type Of Printer Uses An Imaging Drum?

When Do You Replace a Toner Cartridge And A Drum Unit?

When toner runs out, your prints will either be blank, inconsistent, or too light.

What happens when a printer drum goes bad? When the drum wears out, you’ll begin seeing lines or faults repeated across the page. Replace the drum unit when you get white lines on your pages.

How Long Does A Laser Printer Drum Last?

The answer depends on how often you print. In general, a printer drum lasts about three or four times longer than your toner cartridges. That’s why all-in-one cartridges are a bit of a waste; you’re tossing out a drum unit that’s still got plenty of life left in it every time you replace a toner cartridge.

Which is better: separate toner and drum cartridges or all-in-one cartridges? From an environmental standpoint, separate toner cartridges and drum units are better. After all, there’s no reason to toss perfectly good drum rollers into landfills every time you need to replace your toner.

From an economic standpoint, separate toner cartridges and drum units are also a better bet. Toner-only cartridges are far less expensive than all-in-one units, and can be replaced three or four times before you need to replace a drum unit. This might save a few bucks in the long run.

From a practical standpoint, overall running costs for printers using all-in-one cartridges and printers using separate toner cartridges and drum units are about the same. Image and text quality is excellent using either printing method. Some may prefer the convenience and reliability of all-in-one cartridges, arguing that having two components instead of one doubles the chances of potential malfunctions. The truth is, both formats work great, all-in-one cartridges as well as separate toner and drum units. What’s important is that your toner and drum work together in perfect, synchronized harmony, regardless of whether they’re housed in the same plastic casing, or two separate ones.

How To Clean A Laser Printer Drum

What to know how to clean an HP laser printer drum?

Does your Brother need a thorough toner drum cleaning? Here’s how to clean a Brother laser printer drum. 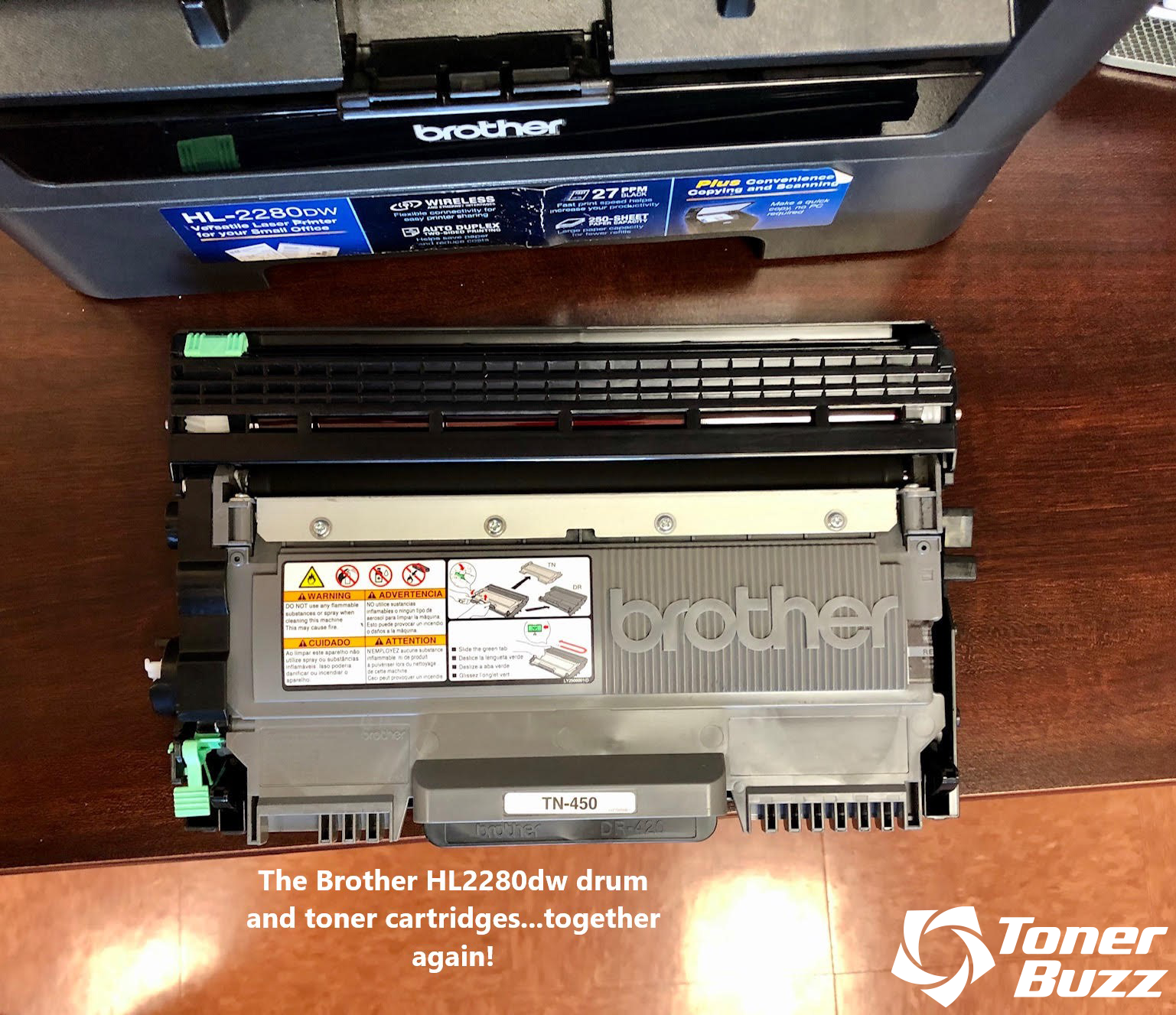 How Do You Replace A Drum Unit?

There’s no magical process to replacing drums. Don’t let printer drum replacement stress you out. We’ll show you how to get that old drum out in no time.

When your printer says replace drum, it’s time to replace the imaging drum. Some Brother machines will hit you with “drum ends soon,” which means, you guessed it, your drum life is coming to an end. Either way, it’s time to buy a new drum, son!

When it comes to the replacement of both parts, toners need to be replaced more frequently than a printer drum unit. A drum typically needs to be replaced after the use of 3-4 toners.

Working together, toner and drum are the knife and fork of your laser printer.

What’s the difference between toner cartridge and drum unit?

Toner vs Drum. What's the difference?

A little dab of toothpaste brings an old drum back to life!